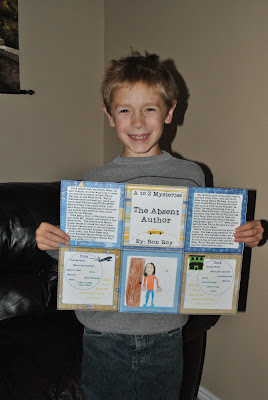 Brock has a new appreciation for my scrapbook room! He had a book report due the end of last month.  He was suppose to create a Story Quilt about a mystery book.  Basically he had 6 requirements that were each suppose to be covered in one block of his "quilt."  Well we got right to work picking out paper, cutting, sponging, stamping and typing.  We both had a lot of fun working on his project and for the record Brock did most of the work.  He typed, cut, sponged and glued his project together.  I will admit that I did stamp the stitches around each quilt block while he was typing and I did help him create his title and character comparisons in illustrator but other then that it was his project.
After the project was done, Brock decided that scrapbooking is kind of FUN! As you can see by the ear to ear smile on his face he was very proud of his finished project!

*Don't look to closely at Brock's hair. It was crazy hair day at school and so we put his hair into a dozen little pony tails.  He said they were pulling his hair and so he took them out but his hair was standing up in all sorts of crazy directions.
Posted by Nicole Norris at Saturday, November 06, 2010 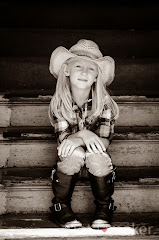